CCTV image released after woman robbed and assaulted in Preston

Do you recognise this woman(pictured)? We are trying to trace her following after a woman was robbed and seriously assaulted in Preston.

The incident happened at around 11.40pm on Tuesday 25 July when the victim, a 42 year old local woman, was approached at a cash machine on Tulketh Brow whilst she was withdrawing money. As the £130 cash was being dispensed, the offender grabbed it and ran off.

The victim has run after her up Kimberley Road off Tulketh Brow when a man, believed to be working with the thief, has appeared and tackled the victim to the ground causing her to break four ribs.

PC Oliver Nevin from Preston Police said: “It was bad enough that this woman had her money stolen but to be then rugby tackled to the floor with such force that she ended up with broken bones is shocking.

“Aside from the woman pictured, we are also looking to trace the man who hurt the victim and need anyone who may recognise the woman or who has any information about the incident at all, to make contact with us.”

The attacker is described as white, around 6ft 5ins and was wearing a green hoody.

Alternatively independent charity Crimestoppers can be contacted anonymously on 0800 555 111 or online at Crimestoppers-uk.org. 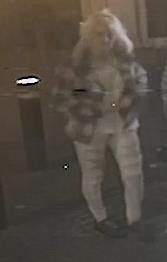