Officers raided the address on Accrington Road, Blackburn, on Wednesday 11 May 2016 as part of an on-going investigation.

Two women in their twenties were found inside and were suspected of being trafficked to the UK from Romania. Safeguarding and welfare issues were addressed, but the women refused to make any complaints against the men, and did not identify themselves as being victims.

Brothers Ionut and Cristian Stan, and the third man Cristian Vasile, were arrested on suspicion of human trafficking for sexual exploitation and later charged.

Officers working under Op Proteus, a dedicated team working to identify both the victims and perpetrators of trafficking and slavery across Lancashire, uncovered that the Stan brothers had trafficked the women from Romania. Once at the address in Blackburn they arranged for the women to be sexually exploited as prostitutes for their own financial gain.

Meanwhile Vasile was found to be the ring leader behind the trafficking and the exploitation, setting up advertising accounts on websites offering services from the women, arranging the wording, photographs and the payments.

Ionut Stan pleaded guilty to facilitating the travel of a Romanian woman with a view to her being sexually exploited and was sentenced to 2 years 4 months in prison.

Cristian Stan pleaded guilty to facilitating the travel of a Romanian woman with a view to her being sexually exploited and was sentenced to 3 years 2 months in prison.

Three men, Marius Petre, Adrian Matei and Ionut Ion, were arrested at an address on Longworth Street in Preston in July 2015 as part of a joint operation between Lancashire Constabulary, the National Crime Agency (NCA) and immigration officers.

Intelligence originating from a tweet on the Preston Police Twitter page led officers to the address which was suspected to be a brothel and concerns were raised about young women at the property. Further enquiries led to the raid in July in which two girls found at the address were thought to have been brought to the UK from Romania and had been forced into sexual exploitation.

The girls, both aged 18, had only been in the UK for around two weeks before officers found them at the address. They had been brought from Romania by two of the men with the promise of work as maids at a hotel.

Instead they were brought straight to Longworth Street and told that they would be working as prostitutes. They were forced to perform sexual acts on customers and were threatened with violence to them and their families if they refused to comply or tried to run away.

They were also subjected to rape by all three men.

Both girls are now being supported through the NCA and the National Referral Mechanism in which victims of trafficking are supported with help to return to their home countries or accommodation in the UK with immigration status assistance. Long-term help with their education and employment is also available through various charities.

The men are now serving a total of 53 years in prison following their sentencing in March 2016.

DI Jane Webb of Preston CID praised the girls for coming forward:“The girls have been incredibly brave throughout this whole process and are now being supported to build better lives here in the UK. They are thankful for being rescued from the evil men that subjected them to such abhorrent crimes and they would urge others out there who may be trapped and are being exploited, to come forward knowing help is available.

“If you believe either yourself, or someone you know, is being exploited, be that sexually or in any other way, please do not suffer in silence. Look out for others in your communities. The victims in this case may not have been found so swiftly if it wasn’t for information from members of the local community. If something doesn’t seem right, contact us as soon as possible. It could be the only chance to help save a vulnerable victim.”

Detectives started tracking a Romanian man, Razvan Ursu, in March 2015 after receiving intelligence women from Romania were using websites to advertise services as prostitutes in the Blackburn area.

Following extensive work, officers identified links with Suffolk Police relating to an organised crime gang based in Ipswich. Suffolk officers had executed a warrant at an address in 2013, finding three men and four Romanian women. One of the men was Razvan Ursu. The group were interviewed and bailed pending further enquiries, but the group, including Ursu, failed to answer bail.

In May 2015, a man was seen by officers leaving an address in St Stephen’s Avenue, Blackburn and following enquiries, identified as Razvan Ursu.

It was quickly established Ursu was driving females around the area, collecting and dropping them off at airports and ports. He was also heavily involved in the prostitution of these women.

In June 2015, officers raided brothels in Ford Street, Burnley and St James Road, Blackburn, where Ursu was caught trying to escape with a female, a Romanian national.

When interviewed by officers, the woman, who later returned to Romania, confirmed Ursu’s role in running brothels in east Lancashire and Suffolk.

Ursu was charged and appeared at Preston Crown Court in March 2016 where he pleaded guilty to two offences of controlling brothels in Blackburn and Burnley and conspiracy to controlling a brothel in Ipswich.

He was sentenced to more than three years in prison with credit given for early guilty pleas. He will also be extradited at the end of his sentence. 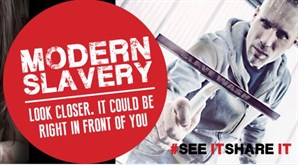