With 24 years service, Jo joined Lancashire Constabulary in 1994. She has an extensive investigative background with over 20 years operational experience as a detective. 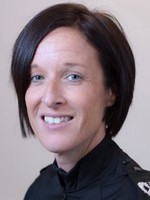 Jo has undertaken every rank within detective roles, she is a PIP L3 Senior Investigative Officer and has worked within both traditional investigative portfolios, such as CID and PPU, as well as various aspects of covert and specialist policing.

As a senior leader, Jo has led number of complex areas of business across Counter Terrorism, Major Crime and Investigation, Intelligence, forensics and Serious Crime.

In 2016 Jo was promoted to the rank of Detective Superintendent and left the Constabulary to be appointed as the Head of Intelligence and Harm Reduction, North West Regional Crime Unit (TITAN), where she led a number of specialist capabilities on behalf of the six North West forces, to mitigate the threat from Serious and Organised criminality.

Jo returned to Lancashire in September 2017 following promotion to the rank of Detective Chief Superintendent where she held responsibility for Serious Crime and Specialist Capabilities, before be appointed to the rank of T/ACC.

With a breadth of operational experience Jo recognises the importance of continuing professional and personal development and is committed to the continuous development of herself and others.

As a LGBT Stonewall role model, Jo understands her leadership responsibility, not only as a role model, but in creating an inclusive culture in which people feel they can be themselves.